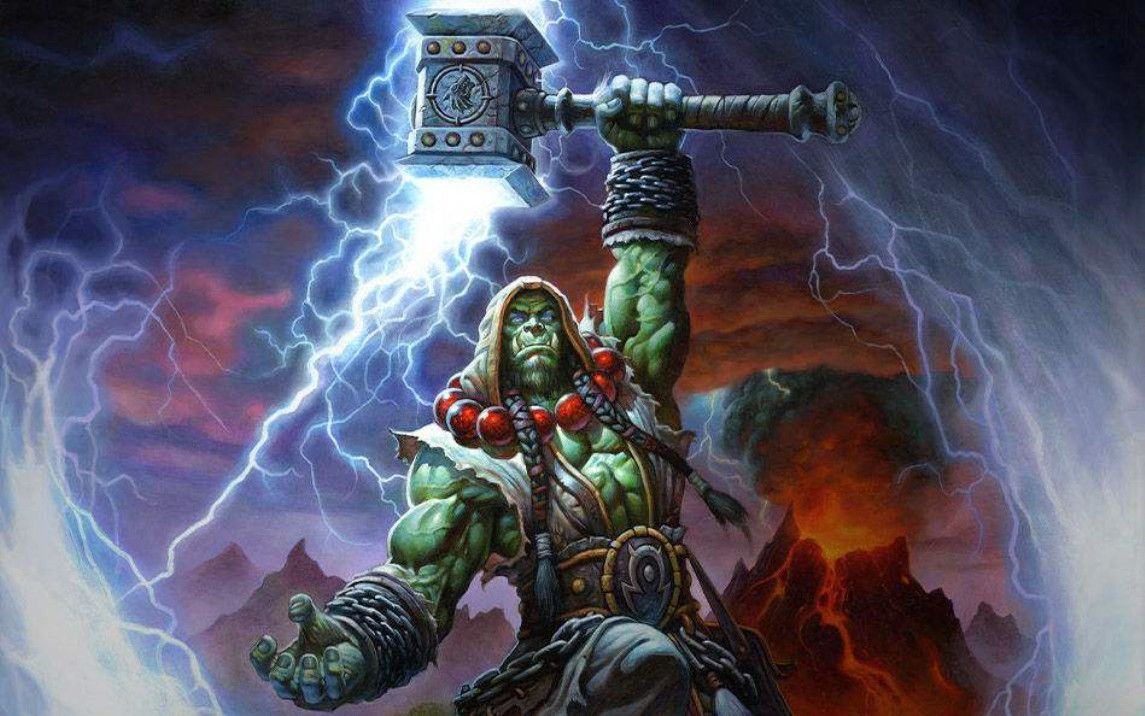 Shamans are the masters of elements: Earth, Water, Air and Fire. They are exclusive hybrid Horde class, which channel the nature power and can wear mail armor. In each party role they have a strong accent on support, giving powerful buffs and other effects for group in the form of totems. Every totem is thematically connected with one of four elements and only one totem of each element can be active at a time, so it is four totems limit. They do direct damage or give buffs (fire and air totems), water totems heal or give mana, earth totems provide defense features. Shaman is a support class and gives you a wide range to play from melee DPS to caster or healer.

Elemental talents and abilities are focused on hybrid range damage. Distinguishing abilities are “Chain Lightning” (the lightning that shots one enemy and then chains to two others), “Shock” abilities (fire, frost and earth) and attacking totems, like “Searing totem”.

Shaman Enhancement talents and abilities are based on hybrid melee damage, providing powerful buffs with totems. Their abilities include weapon enchanting like “Windfury Weapon” (gives 20% chance to deal two extra hits with each attack) and their “Lightning Shield” (protects caster with three charges of lightning orbs, making damage to attackers). Most totems of this tree increase damage: for instance, “Flametongue totem” (your weapon gives additional fire damage with each attack) and “Strength of the Earth totem” (giving extra strength).

Shamans have access to all their totems without dependence on talent trees. Although, the specialization has an impact on power of some of their totems.

Shaman’s leveling is not so complicated, but it can hardly be called simple. Despite self-healing, which decreases breaks between fights, shamans have to pause to generate some mana. Moreover, they cannot fight multiple opponents effectively. Their “Earthbind Totem” can reduce movement speed of nearby enemies by 50% and allows you to keep distance at least.

At level 20 Shamans get access to “Ghost Wolf” form increasing movement speed by 40%. They also can use Water Walking and Water Breathing abilities which may save you time or escape from enemies.

In PvE shamans are healers mostly as it is easy to find dungeon and raid groups. The main reason is their totems. They provide valuable buffs and can resist many boss mechanics, for instance “Tremor Totem” removes fear, sleep and charm effects.

If shaman doesn’t want to be a healer, his abilities are more limited. Many groups prefer not to take enhancement and elemental shamans, though enhancement shamans are more popular for their “Windury Totem”.

Elemental shamans have a strong potential, but they are running out of mana and do not have powerful buffs, that may compensate low damage.

Shaman is amazing in PvP. There is always a spot for restoration shaman in the battleground pre-made group. Their strong natural defense and healing make them one step ahead of priests and druids and in combination with “Cleansing” (removes beneficial buffs from the target) they can be a good support in PvP

Enhancement shamans also play an important role in PvP. They’re strong in small run-ins, although they depend on unpredictable chance of “Windfury Weapon”, to make more damage.

Elemental shamans are more stable, they are way better in 1×1 combats, where their high potential damage is revealed without restriction of low mana stock. Using different control abilities as “Earthbind Totem”, “Frost Shock”, “Grounding Totem” or “Earth shock” they can easily catch and control melee opponents.

The racial choice for shaman is between Tauren, Troll and Orc. Different races will suit better for PVP or PVE and spec you would like.

Trolls are perfect for PVE Restoration and Elemental specializations for “Berserking” as it helps to cast spells faster. It is useful for Enhancement shamans as well. Trolls also get “Beast slaying” (increasing damage versus beasts by 5%).

Orcs are perfect for PVE Enhancement due to “Blood rage” (increasing melee attack power) and “Axe Specialization”. Both abilities significantly increase their potential, and their “Hardiness” make them a good choice for PvP.

Taurens have “Endurance” (increasing total health by 5%) and “War Stomp” (stuns nearby enemy targets). These racial features are better for PvP.

Profession choice for shamans isn’t so complicated.
Engineering is main choice for anyone, focusing on PvP, besides it helps to increase damage of Enhancement and Elemental shamans in PVE with bombs and explosives. Engineers have an access to wide range of gadgets, increasing mobility and giving a control over opponents in PvP.

It can be combined with Backsmithing or Herbalism, that has a high potential to make gold and gives you opportunity to buy ore at the auction house.

Alchemy and Herbalism is also a good option, as it allows to have all consumables for raids. With Skinning and Leatherworking shamans may create armor and gear, although there is not much unique stuff for shamans, and any items can be bought from other players.