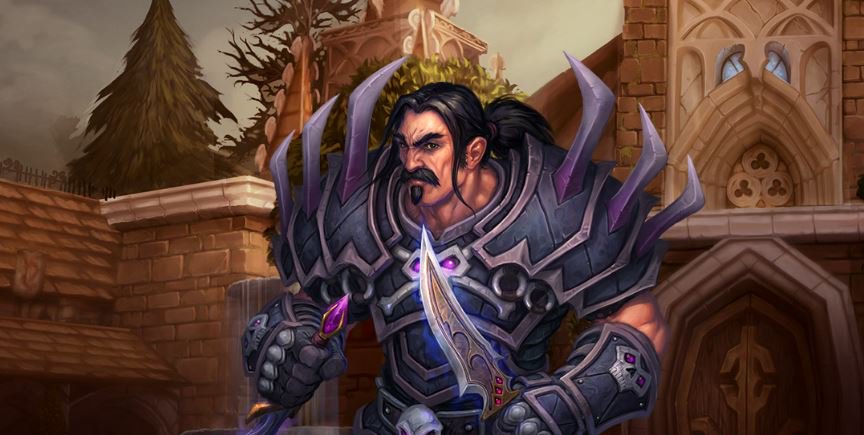 Rogues are masters of stealth and poisons. They are melee assassins and use energy points as ability resource. Their skills generate “combo-points” on the enemy target and can be spent on “finishing” abilities giving extra damage.
Rogues wear Leather armory and do not have high defense level. It is important to control and immobilize the target for them. At the beginning of battle they use a number of short duration stuns and incapacitation effects to keep their enemy controlled during the fight and if rogue lose control there’s chance to leave combat with ‘Vanish”, ”Fade” or “Preparation” abilities.
Rogue is the best class for players who like to be the first to attack and dictate their combat rules.

Rogue’s leveling is more difficult than other classes and is not that annoying as leveling a warrior. That is due to lack of healing skills, so they have to take a break between fights, especially if a rogue is under geared. Using different control abilities, rogues can reduce this trouble.
Their stealth abilities give high potential for leveling. The lack of healing spells is compensated by their opportunity to avoid any undesirable PVP or pass safe by groups of mobs, providing effective way to complete quests and tasks. They also can fight multiple enemies at a time using “Sap”, while other classes have to drink potions or just heal themselves.

In PVE rogues have attractive and clear rotation. They create combo-points with Sinister Strike or Backstab and spend them on abilities giving extra damage. In melee combat, rogues have to deal with boss mechanics more often unlike ranged DPS classes. It adds some difficulty.

Their PVP combat style based on stealth and their control power gives a great advantage in world PVP. You can avoid many fights, using stealth. They are perfect against disorganized enemies and in 1×1, 2×2 combats. More opponents decrease rogue’s chances to survive.
Alliance rogues get an issue fighting Horde, as their “Sap” is less effective against Orcs, who have a 25% chance to resist stun effects.

The racial choice is relatively simple. For players, who want to get maximum of advantages from PvE, orcs and humans are the best races and both offer strong PvP abilities in addition to their PvE damage.
Humans get sword and mace specialization, “Diplomacy” passive ability (increases faction reputation by 10%) and “Perception” (increases chance to detect stealthed enemies). Their sword specialization gives Humans high potential, as swords are preferred for PvE.
Dwarves get “Stone Form” (immune to poisons, disease and blood effects for 8 seconds). It can be useful in different PvP situations as it removes debuffs before going into stealth. It also can be valuable in PvE.
Gnomes get “Escape Artist” (removes any immobilizing effects) and “Engineering specialization”. Their “Artist Escape” is valuable in PvP but useless in PvE.
Night elves get “Shadowmeld” (increases stealth level mastery), but its effect depends on a situation.
Orcs get “Blood Fury” (increases attack power by 25% for 15 seconds) and “Hardiness” (passive ability increasing stun resistance by 25%). Their “Blood Fury” gives a great number of PvE damage, while “Hardiness” may let you win in rogue-rogue combats.
Trolls get “Berserking” (increases attack speed from 10% to 30%), “Beast Slaying” and “Regeneration” (health regeneration is increased by 10%).
Undeads have “Will of the Forsaken” (immune to sleep, charm and fear effects), “Cannibalism” (allows player to east corpses to regenerate health) and “Underwater Breathing”. Their “Will of the Forsaken” make Undead-Rogues are very popular for PvP especially against Alliance Warlocks.

To maximize damage in PvP and PvE, rogue should take Engineering, which combines with Mining to get reagents. Using consumables and explosives, rogues can significantly increase their damage.
Alchemy and Herbalism is good to create own potions and flasks for PvP and PvE. This combination has a better potential to make gold than just Engineering with Mining.
Rogues should improve Lockpicking and Poisons class skills. Poisons increase your damage and apply debuff effects to your target. Lockpicking allows you to open lockboxes of all levels.