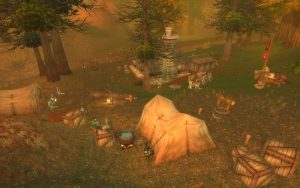 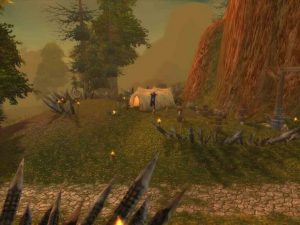 In Eastern Plaguelands, the Argent Dawn holds their main base in Light’s Hope Chapel. 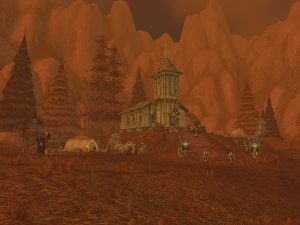 For Horde members there is Argent Dawn camp at the Bulwark, the border between Western Plaguelands and Tirisfal Glades.

You can kill mobs in the Plaguelands (including dungeons like Scholomance and Stratholme) for the start for Argent Dawn reputation grind. Mobs will stop giving reputation fast, though, with the exception of dungeon bosses.

Normal Undead mobs in Western and Eastern Plaguelands will grant reputation until 3000/6000 into Friendly.

Elite mobs in the Plaguelands and normal mobs in Scholomance/Stratholme will grant reputation until 11999/12000 into Honored.

Bosses in Scholomance/Stratholme will grant reputation all the way to Exalted.

Tip: Make sure you always wear

Argent Dawn Commission to get all kind of Scourgestones at the beginning. The trinket can be obtained from your faction’s quartermaster

Argent Dawn Commission (in The Bulwark for Horde and Chillwind Camp for Alliance). Save Scourgestones for future (until you are Revered).

The Active Agent quest and

The Flesh Does Not Lie, given by Betina Bigglezink at Light’s Hope Chapel, will upgrade your

Argent Dawn Commission trinket to either

Seal of the Dawn or

Rune of the Dawn. Each of these trinkets has the same effect as the Argent Dawn Commission (providing Scourgestones from mobs).

There is a chain of quests

The Scourge Cauldrons, that gives you plenty of experience and reputation. After completing the main chain, you will be able to start repeatable quests.
Talk to Alchemist Arbington in Chillwind Camp / or Apothecary Dithers at The Bulwark. They will give you

Vitreous Focuser, which allows you to loot reagents from Undead mobs in the Western Plaguelands:

Vitreous Focuser has a 30-minute duration.

You get approximately 25 reputation for each cauldron cleaned. 27-28 if your character is Human-race.

Make sure to purchase

Here’s the list of necessary consumables for each cauldron:

Many quests in the Plaguelands grant reputation with Argent Dawn, all the way to Exalted.

All Scourgestone are recommended to turn in at Revered with Argent Dawn.

Argent Dawn Commission trinket allows you to collect Scourgestones from Undead mobs in the Plaguelands. Each turn-in grants 25 Reputation with Argent Dawn as well as

Argent Dawn Valor Token, which grants additional 25 Reputation on use.

It is advised to save

Argent Dawn Valor Token at Revered and another 25 at Exalted to unlock Argent Dawn shoulder enchants, check them below.

All bosses in Stratholme and Scholomance also drop these tokens.

Moreover, once you complete

Healthy Dragon Scale, which can be turned in for 50 reputation. Items do not stack.

Argent Dawn has 3 quartermasters, each located at one Argent Dawn camp:

Argent Quartermaster Hasana in The Bulwark, Tirisfal Glades, for the Horde;

To unlock Argent Dawn shoulder enchants, you will need to complete two quests, one at Revered and one at Exalted:

Mantles of the Dawn. This will unlock five different resistance shoulder enchants,

Nature Mantle of the Dawn /

Arcane Mantle of the Dawn /

Frost Mantle of the Dawn /

Flame Mantle of the Dawn /

Shadow Mantle of the Dawn at the Quartermasters.

Chromatic Mantle of the Dawn. This will unlock the multiple resistance shoulder enchant

Chromatic Mantle of the Dawn.

Below is a list of all items sold by Argent Dawn quartermasters. Most of recipes will be added in Phase 3.